Flew my drone over the town tonight.

The future is now.

Of the eight people that read this blog, six of them are my good friends from school. The rest are family. I am blessed. These friends and family know me well, some more than I would like to admit 🙂 Some know of the games we played in college, among them was a game where you could use drones. There were helium drones run by solar power, copters with guns, mini cars with tracks instead of wheels. There were driverless cars. This was 25 years ago, and it seemed impossibly far into the future. And yet, here I am, flying my drone, watching video footage on my iphone as I fly it, with GPS maps showing the location and direction. It shoots video in 4k . I don’t think the scifi games could even imagine that one.

The opening of the 1984 novel, Neuromancer, starts in Chiba, where I live now, and goes something like this:

That line has stuck with me over the decades that I’ve lived here, mostly in Chiba. The rainy season is in full swing and there are few days when the color is not that dull grey punctuated with quarter-sized raindrops.

But the nights are like a Ridley Scott movie, like Bladerunner, full of neon. Just look below, and you’ll see what I mean. Click on the image to enlarge. 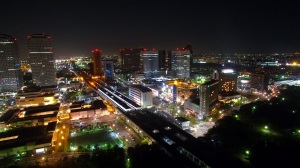 2 thoughts on “Makuhari From the Air”