It’s not just me, or so my sensei tells me. Most of her students dread the kana part of the monthly submission for calligraphy. It’s the hardest, it’s the most abstract, and has the most exceptions.

Way back in the early days of the mid-90’s, eons ago in dog years, I read a book by Nicholas Negroponte, called Being Digital. I am reminded of one section of the book constantly, the concept of hard fun. The challenge, the fact that serious effort is required makes it hard, but that you succeed is what makes it fun. There is satisfaction in learning, in succeeding. We get a hit of dopamine to the brain. We keep wanting more. Most good things in life require effort. Otherwise where’s the fun?

If that’s the case then kana is the hard fun of a lifetime. At least, it’s the hard part. I have yet to feel like I achieved anything, so the fun must continue to be the journey, at least for now.

Below is a photo taken of this month’s kana practice. It’s in the December issue of Shodo Geijutsu. Look at the middle section, with the greyish background. You have to write it as close to the example as possible, including the thickness of strokes, the flow from one to the next, the partial strokes, and sometimes the suggestion of strokes without actually writing anything. 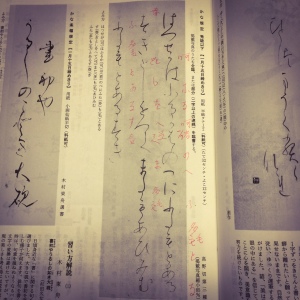 Kana are standardized in modern Japanese. Go to an elementary school – which I have, to meet my kids’ teachers – and it’s written around the top of the chalkboard, just like the alphabet was back in Joyce E Kilmer Elementary in West Roxbury in the early ’70s. It’s a standard. The hiragana for the sound “a” is the same on Monday as on Tuesday, as it is all week long.

Or so they fooled me into thinking. Apparently, after spending the last 24 years in Japan – on and off, to be honest I’ve only lived in the country for 17 of the last 24, but who is counting – after spending the last 24 years here, learning the language, reading, writing, speaking the backwards grammar, lack of subject, lack of object, occasionally just a verb combined with some sense imagery – and yes, you are expected to follow this all in context – NOW they tell me that in shodo they sometimes write it differently… sometimes.

Well smother me in hatchimitsu and tie me to an ariszuka.

Well, suffice it to say that I hadn’t a clue which was which for about half of them. So the little red marks are my notes, showing what the kana are derived from, and how to interpret it.

My sensei, bless the woman’s patience and kindness, took half a class just to talk me through it. She was like a seasoned pilot on the ground, talking to me via radio in the control tower, full of calm patience, and I’m the only surviving adolescent on a ’70s era 747, the pre-modern ones with minimal autopilot. She kept me calm. I landed the plane. It was a miracle. No further casualties.

Anyway, the result is what you see below. To the untrained eye, with some filters to give it an aged feel, it don’t suck air. What did sensei say?

Well, you wrote it.

She is patient, kind, and honest.

As the complete novice that I am, I am satisfied with my first steps in the right direction. I doubt I will ever go up a rank with this kind of submission, but it was fun