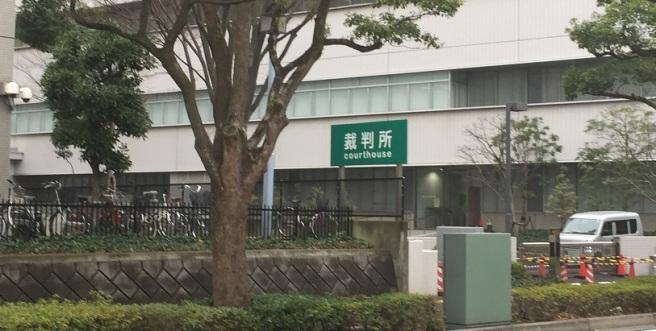 OK, so it was a bit strange, but I have to say, I had a good customer experience at the courtroom today. See my post yesterday about getting Nabbed by the Keisatsu. The parking violation cost me 40,000 JPY, about $340 USD. There’s no way that’s going to feel good. I have problems with some cultural differences in Japan. That’s part of being an expat. But compare a hefty fine to a guy selling cigarettes and gets choked, this kind of civility is a breath of fresh air.

Below is my day at the courthouse:

At the entrance are a couple of cops in short windbreaker jackets. They look about 60 but still fit, mostly bald but one guy with a full head dyed pitch black, unnaturally so. Their short jackets are bright blue with Chiba written on it. They hand me a piece of paper with the flow of events written clearly, in order, from one through four.

Then you can go. I am number fourteen for the day. Please don’t lose this paper. Please don’t forget the number. You will be referred to by the number only. Today I was number 14. I wait in a silent room with fifteen or so people until they called me. The waiting room is quiet, painfully quiet, library quiet. Even the baby that one woman is carrying in her baby bjorn is quiet, awake and looking about, but quiet. The police at the back of the room cover their mouths and whisper at each other conspiratorially. In the two and a half hours I’m here the only talking I hear is between the police and the offenders in the other rooms and two young women, only one an offender the other a best friend with their heads together. The sound of the air circulating is louder than the people.

Number one on my process flow, the police investigation, is conducted in room one, wouldn’t you know it. A Young guy around 30, wearing a police uniform sits me down in a booth as wide as the plastic chair, not unlike a visitor to a prison in the movies, only smaller and with no window.

I was struck by how careful and polite he was. He was careful to explain again everything that was on the instructions paper they had given me. He then read to me the flow of events, what I had already read for myself. He asked me for my driver’s license, asked if there were any changes to name or address. He apologized that they would keep the license until the no of the process, which is when I would pay my fine. Yes, he apologized for having to keep the driver’s license.

Then he took out the report the nice policemen had written for me when I visited the police station on Xmas. He took pains to explain that they had written my name again on another piece of paper because the first one was written by hand and that the date they used was the Christian calendar not the Japanese calendar for my birthday (for those unfamiliar, this year is the 27th year of the reign of the Heisei emperor). Is all of that understood. Yes of course. I explained I had just been forgetful. He smiled pleasantly and said I could go to the waiting room. The whole time he used the most polite language, the whole time very deferential. He apologized a couple of times.

Later, I thought about the way he explained the changes to the paperwork and the explanations. It felt like there must be some kind of legal loophole that they were covering. I could be wrong. It could be the influence of the litigious society I’m from.

I went out to the waiting room and waited patiently to be called again.

After fifteen minutes or so my number was called again. I walk into the next room, number 2, wouldn’t you know it. This time it’s a 40 something guy in a suit. He’s balding, teeth yellowing from too many cigarettes. He has a smile on his face too. And while he is deferential he doesn’t use quite as much polite Japanese, he’s still really nice. He’s a detective, not an officer. He again checks my driver’s license and asks if the information is correct. It is. So then he tells me that I have the right to say what I want in court. That is my right. Or I can continue with the simplified version of the court process. I say let’s just go ahead.

I explain what happened. He again explains that it’s against the law to park long term. Even if it isn’t illegal to park there. Do I understand that. I do. So they’re getting a lot of reports of people parking there long term. Maybe they don’t have a real parking space. He wants me to know that it’s illegal and if you invite friend to visit they can’t park there overnight either. I should share this information.

And then it dawns on me. I got caught in an propaganda campaign. They saw people parking on the street more than they wanted. They want to get the word out. Sting a couple of folks, put the fear of god in them. I tell him that it is well known. People are talking about it. He seems happy to hear that. There are a lot of people who think it’s a pain in the neck to park it in the garage. Oh no, I’m not one of those people. So then it’ll have to be a fine then. Are you alright with that? Yes, he asked me if it’s ok that they make me pay a fine. Wow.

Ok then. Please wait outside and you can pay your fine in a little while. It was an expensive mistake but I admit that I did what I did.  There was no malice, but there you have it.

Then as I’m writing down my thoughts he comes out and calls me back in. In the back of my head I’m hoping that he’s going to tell me that they don’t need me to pay anything. That if I just spread the word that you can’t park like that then they’ll let it go. Instead he wants me to put my fingerprint on the paper. They use hanko, stamps with your name on it, to sign official documents in Japan. And since I don’t have one, just signing isn’t enough. It’s a cultural difference and please understand. I color my left index finger with black ink and press it over my name where the sign is to stamp your hanko.

Then they start calling us to #3, where we get our sentence.

The first tranche of offenders walks to the window. Numbers one through seven with the number six conspicuously missing. They disappear into room 4 where a couple of folks in nicer suits ties and surgical masks receive them. The sound of laser printers shunting back and forth at slow clipped pace hint at receipts being paid. I wonder to myself why six isn’t called. Maybe he or she fought back and wants to take it to court. Maybe he was disappeared.

Then the second trench was called. In the first group numbers one through seven. In this next group I expected eight through fourteen. But, again conspicuously, numbers nine, eleven, and fourteen are left out. Fifteen and sixteen are called. I’m fourteen.

I remember my musings before about why numbers were skipped and immediately dismiss the idea that they were disappeared. No fun going there. Maybe they split the tranches by level of fine. This could be good for me. Or it could be bad for me. Now I just want to go home. It’s eleven. I’ve been here since 8:45. I pay my 40k JPY and hit the road. They thank me. I thank them. I bow to a lot of people and go on my way.

2 thoughts on “A Good Experience with Police? Yes, Expensive but, Yes”