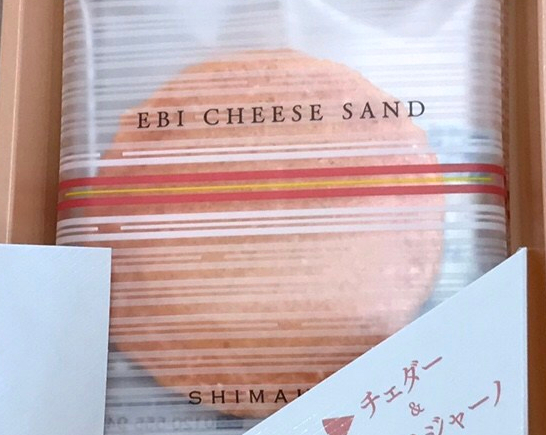 I feel like I’ve been in Japan too long. Or maybe it’s just peaks and valleys. I used to see oddities everywhere, bits and pieces of culture that tilt your head like a puppy trying to get human speech. Then, twenty or so years pass, and everything seems normal. Or maybe my filters are broken, letting the signal pass through without setting off the alarms.

Take the snack in the picture above. In 1991, I would have found Ebi Cheese Sand to be about as alien as Marvin the Martian. I mean, how appetizing is sand in your cheese? Sand isn’t even food. It’s something you make sure doesn’t get in your food.

So there I was, at work, contemplating my complacency. A co-irker had gone away for a couple of days and brought back a little local snack for everyone in the office, and there it was. I turned my filter back on, and saw the sand in my cheese snack.

My filters had been off for so long because I was used to sando as the word for sandwich in my adopted language. Because saying sandwich in Japanese is a handful and takes about a half hour to spit out (the words, not the sandwich). In English, the word is two syllables, often abbreviated to sammich (by me anyway, your mileage may vary). But in Japanese, you gotta pair every consonant (except “n”, don’t ask) with a vowel. And vowels are their own syllable too. So sammich becomes sa-n-do-u-i-tt-chi (trust me on the double “t”, it’s kind of a syllable too).

Seven syllables. You could write a letter to your Mom with seven syllables. Double that and you have the first line in the Bible, the one about creating heaven and earth. Clearly, you gotta simplify, create some acronyms.

So they shortened it. It’s like texting; you can’t spend half a day writing “laughing out loud” (never mind that I just did; this is a blog, mind you), so you write LOL, FWIW, or WTF. And it’s cool to boot. You get to use English in your product name, which is kind of like using French when describing a perfume. Eau de Toilette is much better than watery cologne, despite the fact that it means toilet water. Go figure.

So a Cheese Sand is a hip, cool, fun snack with cheese between two wafers. Oh, and “ebi” means shrimp.